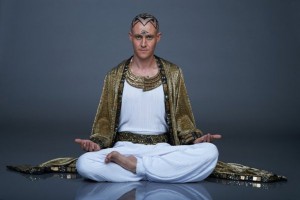 I do what I do to better understand myself. I hope that through my performances I help bring the audience closer to understanding who they are.  Before the Renascence Most all Art was done as a form of spiritual expression. Art made up the fabric of culture and culture was influenced by spiritual pursuits and geography. All great art has “enthusiasm” The Latin root of that word is “Enthos” which mean inspired by god. In today’s world the arts are motivated more by money than spiritual belief. I intend to bring us back to this old world artistic motivation. My performances are inspired by my spirituality. Through my performances I hope to promote ideas of religious tolerance and the possibility global unity and peace. Unity through diversity is the key and for there to be world peace everyone must try. Everyone must believe that it’s possible.

I also hope to inspire young people of their true potential that is unlocked through belief. Just as in a magic show when one believes or surenders their disbelief they have a much more enjoyable experience than when they are entirely scepticle. When one believes in a greater purpose it gives you that an added determination that gives one the extra edge needed to succeed. If you tell a child they are smart they will become smart because they will strive for that. The child believes being smart is what i’m good at so I’m going to pursue this further to be a valuable member of my tribe.  Anything is possible if you put your mind to it.

When people ask me if I’m an illusionist I tell them “The physical world is the illusion. And the spiritual world is what is real.” In this world nothing is as it seems. And we are bombarded with infinite distractions that test our ability to stay focused on our spiritual destiny. Magic is just a word used to describe something we can’t explain. Everything has a potential explanation and as we are able to understand more and more about the physical the less magical the world is.

There are many people who are longing for that magic and mysticism. These are my Fans. I offer A performance that provokes thoughts and deep discussion of life’s mysteries and potentials.  I have many critiques who despise my  blending of performance with spirituality. They tell me that it’s BS that it’s not true that I  perform through spiritual power. I say yes I do get many powers from spirituality. I get added determination, confidence, clairvoyance, charisma, intuition, empathy, perceptiveness, and ESP. It is these traits that separate my performances from the mediocre.

I am a musician, singer, magician, actor, comedian and story teller. I combine many different art forms to create a profound experience. I have many differnt tools in my tool box that help me create this unique experience. Surprise and suspense and spectacle are crucial in my shows. I like to think of myself as the native American Spirit Guide “Coyote” who uses tricks to teach a lesson.

How I want to Change the World

I have been bestowed with many gifts and I believe it is my duty to share those gifts with the world. I had a very unusual upbringing and I think that that leaves me with a unique perspective on life that I hope others can be inspired by. I want to use my position as an entertainer to inspire deeper thought regarding certain issues.

I want to draw attention to the power of belief in unlocking your true potential. I want people to realize that world peace is possible if every single human believes that it is. If every human tries. The reason there is no world peace today is because still a decent portion of the world doesn’t believe in world peace or thinks it’s a spectator sport. I believe in principals inspired by being raised in the Baha’i Faith. “Unity through diversity” is the key to world peace. I want to be a champion for the underdog. I want to show people that usually those who seem the weekest  end up the most powerful in the end. I want to raise up the people who have always been misunderstood and glorify their uniqueness.

Religious extremism is causing much of the conflict in the world. I intend to promote religious tolerance through my performances. All the religions are differnt colors of a rainbow of the light of god.  I hope that my performances will inspire people to be kinder humans.